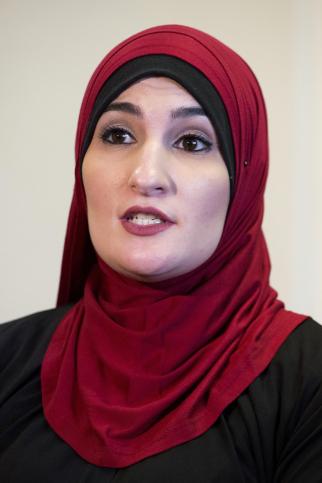 Controversy: Endorses BDS and expresses anti-Israel and anti-American sentiment. Endorsed Rasmea Odeh, a convicted terrorist who had killed two Israeli civilians. Has attacked NYPD informants and counter-terrorism measures.  Claims to support feminism while endorsing sharia law. Brother-in-law was arrested (and currently serving a 12-year sentence) for working with Hamas. Also endorsed Al-Awda, an organization advocating for the Palestinian right of return, which supports intifada. Also attacked ex-Muslim Ayaan Hirsi Ali, and said she wanted to “take her vagina away.”, and has exploited funds from Hurricane Harvey donations. More recently, she has called for a jihad on President Trump.

Other Controversies:  Recently accused of covering up sex-abuse, where she punished the victim. During her push to become Brooklyn’s borough president, sought to secede from New York City and become mayor. Her husband, Maher Abo Tamer, expressed religious misogyny on facebook, and owns a convenience store known for selling alcohol to minors. He was also facing deportation in 2004.

Underwear bomber was the #CIA all along. Why did I already know that?! Shame on us – scaring the American people.

Sarsour supporting terrorist Mohammad Allen, who was jailed for activities in the Islamic Jihad terror group.

Her organizing for Al-Awda, an organization whos membership has links to terrorism:

Quote of the Day