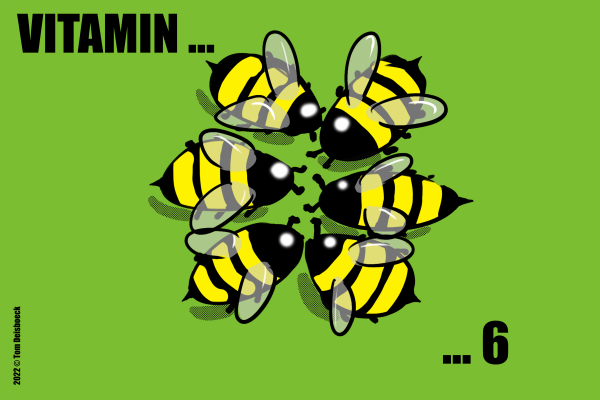 Although there are eight different B vitamins, some get more attention than others. And while vitamin B12 is often spotlighted for its role in keeping blood and nerve cells healthy, vitamin B6, also known as pyridoxine, tends to fly under the radar.

Like most of the B vitamins, B6 is essential, which means your body can’t synthesize it — you have to get this vital micronutrient from your diet. Are you getting all that your body needs? That’s worth asking, particularly if you’re eating less of certain foods for health or environmental reasons.

What B6 does in your body

Vitamin B6 plays a role in more than 100 enzyme reactions in the body. It helps your body break down protein, carbohydrates, and fats that build muscle, supply energy, and fulfill a multitude of essential tasks. Vitamin B6 also helps

A B6 deficiency issue?

A recent study found that nearly 13% of Americans may be deficient in vitamin B6, based on blood levels of the biologically active form of the vitamin (pyridoxal 5-phosphate). Researchers noted that death rates may be somewhat higher for people with insufficient or deficient B6 levels. However, it’s important to put these findings in context.

“These are likely to be people who have low-quality diets overall, so it is difficult to conclude that inadequate vitamin B6 is to blame,” says Dr. Walter Willett, professor of epidemiology and nutrition at the Harvard T.H. Chan School of Public Health.

Advice for getting enough vitamin B6

Although fish, dairy, and poultry are among the richest sources of B6, this vitamin is also found in beans, nuts, and many fruits and vegetables. So if you eat a high-quality diet that includes fresh, unprocessed foods, you’re probably getting an adequate amount of vitamin B6, says Dr. Willett.

But increasingly, some people have begun cutting back on meat, dairy, and fish for health or environmental reasons. “If they don’t replace those lost calories with healthy, plant-based protein such as legumes and nuts, they might be at risk for inadequate vitamin B6 levels,” says Dr. Willett.

Taking a standard, inexpensive multivitamin/multimineral supplement is one way to be sure you’re getting an adequate amount of vitamin B6, along with adequate amounts of other B vitamins. “Of course, a supplement is not meant to replace a healthy diet, which also provides many health-promoting substances known as phytochemicals not found in pills,” he adds.